Another important General Assembly meeting was held last October within the BioSFerA Consortium.  On this occasion, the partners met in Ghent (Belgium), at the Bio Base Europe Pilot Plant’s headquarter: last project updates and an interesting tour at the biobased process plant made well successful the meeting at BBEPP.

At this stage of the project, the biological process plays a significant role for all the following steps. Several partners contribute to the lab-scale optimisation to fully comply the further piloting activity and the overall BioSFerA concept achievement. Starting from the microorganisms’ investigation, CSIC updates the Consortium with its work to improve both acetogenic bacteria and oleaginous yeast strains on their production rates and contaminants resistance through a metabolic engineering strategy. On one hand, the Spanish research centre is working to optimize the overproduction of enzymes in the acetogenic bacteria Moorella, by increasing the copy number of the genes introduced in the strains using plasmids. Furthermore, they have genetically modified the oleaginous yeast to create an obese strain overexpressing synthetic DGA genes (diacylglyceride acyltransferase) and deleting a gene involved in the fatty acids degradation metabolism. This Y. lipolytica yeast strain has been tested in different media with single or combined substrates (glucose-acetate-glycerol). The results showed better performances in all the cases for the GMO yeast strain than the wild type. Next months, CSIC plans to test new obese strains and perform other experiments to increase the production of TAGs with higher C14 content.

First lab-scale results begin to be achieved in the gas&liquid fermentation processes, where BBEPP and CARTIF are mainly involved. They are currently testing the Moorella strains considering different gas composition and other process parameters to understand the biomass behaviour and its productivity. From the BBEPP side, the syngas fermentation trials are currently under operation using 1 L batch fermentation and 10 L continuous bioreactors aiming to increase the process performance; meanwhile, CARTIF is conducting the gas fermentation tests on 1 L pressurized bioreactor, discovering the glucose as possible co-substrate useful to increase biomass and acetate production.

For what concern the liquid fermentation, BBEPP successfully cultivated Y. lipolytica on the gas fermentation effluent in shake flasks, thus confirming the BioSFerA concept. Furthermore, a series of bioreactor trials were performed to assess the TAG accumulation potential of the Y. lipolytica strain modified by CSIC on acetic acid (AA) and glucose. In parallel, CARTIF also completed fed-batch and continuous optimization trials testing different substrates, such as AA substrate, AA and glycerol or only glucose. The parameters still need to be optimised to reach the final target set at 60 % TAGs accumulation and 50-100 g/L TAGs. CARTIF will continue the trials focusing on the AA/glycerol substrate and improving concentrations and other process parameters.

Last stage of the biological process is the recovery and purification of the TAGs, which is currently under investigation by BBEPP. During the meeting, a sample of purified microbial oil produced by Y. lipolytica was showed to the Consortium to better understand each step development. A sample of the obtained oil will be also sent to KPRT for further analysis, while a broth sample will be available for ENVIPARK to perform the steam explosion and advances with the downstream process step.

Progress from the piloting: last September BBEPP and VTT met to define next steps and integration process between the two gasification&fermentation units. A HAZOP study was conducted, risks were listed, together with mitigation measures, as well as the following BBMPP’s shipping and the preliminary operational conditions. BBEPP is also taking care of the fermentation scaling-up activities, running trials on 150 L fermenter with Y. lipolytica and glucose as substrate to set up the process parameters. The gas&fermentation piloting phase will start in April 2023 and will be finished latest by October 2023.

Continue the BioSFerA model concept development: the EMMS model for the DFB (Dual Fluidized Bed) and the full chain model at commercial scale are performed by CERTH with SFW and partners collaboration. The techno-economic analysis will consider the entire value-chain accounting for capital and operational costs and biofuel minimum selling price. A sensibility analysis will be performed from the base-case scenario in order to identify hotspots for cost optimization. At the end, at least 3 scenarios in different EU countries will be analysed to verify the versatility of the model at territorial level. The analysis will be completed with the LCC and LCA results.

A first market assessment was also present by GF, showing the competitor market analysis of different biofuel processes. Likewise, the evolution of pricing over the years, as well as forecasts for future pricing, were discussed for conventional and alternative technologies. According to GF some serious impacts could be originated by the Ukrainian war on biofuel production, due to European imbalance of energy supply and offer. From a legal point of view, KPRT rather reports possible further revision of a large number of European policies and directives associated with the Fit-for-55 package.

The Consortium is also very active from the dissemination side and the partners participated to several events during last months. Worth mentioning, in November ENVIPARK took part at the international fair on circular economy ECOMONDO (Italy) with an institutional stand and its projects, included BioSFerA. The project was even presented during a workshop organised by GLAMOUR, another European project with an active collaboration.

After more than two project’s years, BioSFerA has reached some relevant results and the project is well advancing. Some important challenges still need to be faced, but the activities respect the project schedule and the Consortium is hopeful to easily accomplish them, thanks to the high-level and cooperative partnership. Further updates will be released after the meeting planned next May 2023 at VTT’s premises in Finland. 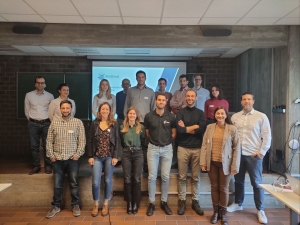 The BioSFerA Consortium at BBEPP premises during the 5th GA meeting

This project has received funding from the European Union’s Horizon 2020 research and innovation programme under Grant Agreement No 884208.
This document reflects only the author’s view and INEA is not responsible for any use that may be made of the information it contains.

The biological pathway for the fuels of the future

Biomass Conversion and Biorefinery Journal: a new paper on BioSFerA
Scroll to top

We may request cookies to be set on your device. We use cookies to let us know when you visit our websites, how you interact with us, to enrich your user experience, and to customize your relationship with our website.

Click on the different category headings to find out more. You can also change some of your preferences. Note that blocking some types of cookies may impact your experience on our websites and the services we are able to offer.

These cookies are used to collect information about traffic to our site. The information gathered does not identify any individual visitor. The information is aggregated and therefore anonymous. It includes the number of visitors to our site, the websites that referred them to our site and the pages that they visited on our site. We use this information to help operate our site more efficiently, to gather broad demographic information and to monitor the level of activity on our Site.

If you do not want that we track your visist to our site you can disable tracking in your browser here:

We also use different external services like Google Webfonts and external Video providers. Since these providers may collect personal data like your IP address we allow you to block them here. Please be aware that this might heavily reduce the functionality and appearance of our site. Changes will take effect once you reload the page.