The syngas production from different biomass feedstocks is the first process step characterising the concept proposed by BioSFerA. Thanks to the exploration of these biofeedstocks from all over Europe, the improvement of the gasification process allows to increase the value of the BioSFerA’s technology according to sustainability and circularity principles. As initial stage, it is also crucial to have a good operative and performance control for the following gas fermentation steps and downstream process to achieve the final biofuels as expected.

VTT, as an expert in the gasification process, has carried out the bench-scale test at TRL4 with 5 different feedstocks, necessary to proceed with the second step of fermentation. These preliminary analyses are also important for the scale-up activity consisting into the integration of the BBEPP’s mobile gas fermentation unit with the syngas process and having as main results the construction and run of a pilot process plant at TRL5.

Mr. Ville Nikkanen, which has coordinated the VTT activity on the syngas production, explains more in detail the path taken and the future development concerning the syngas plant.

What tests have you conducted so far and what results have they produced?

Preliminary tests at bench-scale have been conducted to provide data describing the syngas composition produced by the feedstock used for the biological research and the following double-stage fermentation. The bench-scale tests were conducted in a bubbling fluidized bed gasifier (BFB), showed in figure 1, with continuous flows of feedstock, bed material (sand and dolomite) and gasification agents (H2O and O2). A hot gas filter and reformer units were used for eliminating particles and tars from the produced syngas. For removing trace impurities and for improving the syngas quality, a water scrubber and adsorber beds after the reformer unit were tested. The gas quality were analysed by using different online and offline gas analysis methods. During the experiments, the main parameters influencing the final syngas composition are the feedstocks and the feed gasses (O2, CO2, H2O, N2) and the used processing units. The achieved results show the reforming unit is required in the gas fermentation process in order to remove the harmful components (e.g., naphthalene and benzene). Moreover, gasses that are fed into the gasifier and reformer (O2, N2, H2O, CO2) and their volume flow influence the syngas composition more than the selected feedstock. Finally, water samples collected after the reformer unit seem to be suitable for gas fermentation. The long-term accumulation of impurities and the effect of this will be studied later in the project in piloting runs expected to be carried out in 2023.

How does the different feedstock affect the functioning of the system?

5 different feedstocks in the form of pellets have been tested: forest residue, bark, straw, sunflower husk and olive pruning. Higher concentrations of H2S, COS, HCN, and NH3 are measured with feedstock that have high sulfur (S) and nitrogen (N) content, such as straw, sunflower husk, and olive prunings. This might lead to larger requirements for the gas cleaning in the downstream, if these gaseous components inhibit the growth of microbes. Also, ash sintering can cause more operational problems in the gasifier if straw, sunflower husk, or olive prunings are used as a feedstock in the pilot process. Based on those bench-scale gasification tests all of the feedstocks could be potentially selected for the piloting runs, specifically because the reformer helps to average the syngas composition. Then the main criteria for the feedstock selection are their availability, cost, and sustainability.

What is the added value in integrating the syngas unit with the fermentation unit? What kind of technical limits must be overcome?

The integration between the syngas and fermentation units allows to join the best characteristics of each technology in the right combination in a single process. The thermochemical and biochemical approaches offset each other in some steps, reducing costs and enhancing the efficiency of the overall process. For example, the costs of sulfur (H2S) and nitrogen (NH3) removal could be potentially minimized as the microbes seem to be very tolerant toward these components. However, some specific components such as hydrogen cyanide (HCN, COS) can be potentially very inhibiting and toxic even at very low concentrations leading to a need to remove these components selectively. Sure, it is also a challenge to find the right syngas composition to feed the microorganisms, the conditions to exploit the technology according to the available feedstock, and from a bench to a pilot-scale until TRL5. One of the main technical parameters is the monitoring and minimisation of the inhibiting components in short and long-term operation activity. An ultra-cleaned syngas unit helps to control these data and a continuous syngas flow is required to minimise the production of unwanted substances from not standard operation.

What are the next steps and expected results to reach?

Last improvements to optimise the syngas production are focused on the minimisation of the operational risks in the piloting phase. Therefore, the main activity is the identification of the most critical impurities and, specifically, the impurity tolerance to better control the risks and select the only the necessary process units, reducing costs and enhancing the overall efficiency. In parallel, an action plan has been settled with BBEPP, in charge of the mobile gas fermentation unit. The main next steps and the shipping of the components at Bioruukki in Finland have been defined, planning to start with the integration operations in March 2023 to have the process completed by the end of March 2024. The pilot-scale gasifier can be fed with maximum 100 kg of biomass per hour. The aim of these piloting tests is to produce a realistic gas mixture for the gas fermentation and run the process continuously for hundreds of hours to verify the performance in a realistic environment and to scale up the gas fermentation step in an integrated process. Until now, we have worked together with BBEPP to identify some starting parameters to join the two units, such as the minimum gas pressure at the compressor inlet and also safety and automation requirements. 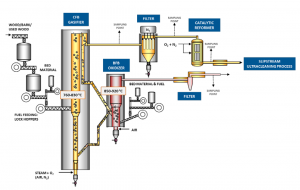 This project has received funding from the European Union’s Horizon 2020 research and innovation programme under Grant Agreement No 884208.
This document reflects only the author’s view and INEA is not responsible for any use that may be made of the information it contains.

The importance of the microorganisms’ study in the BioSFerA concept

We may request cookies to be set on your device. We use cookies to let us know when you visit our websites, how you interact with us, to enrich your user experience, and to customize your relationship with our website.

Click on the different category headings to find out more. You can also change some of your preferences. Note that blocking some types of cookies may impact your experience on our websites and the services we are able to offer.

These cookies are used to collect information about traffic to our site. The information gathered does not identify any individual visitor. The information is aggregated and therefore anonymous. It includes the number of visitors to our site, the websites that referred them to our site and the pages that they visited on our site. We use this information to help operate our site more efficiently, to gather broad demographic information and to monitor the level of activity on our Site.

If you do not want that we track your visist to our site you can disable tracking in your browser here:

We also use different external services like Google Webfonts and external Video providers. Since these providers may collect personal data like your IP address we allow you to block them here. Please be aware that this might heavily reduce the functionality and appearance of our site. Changes will take effect once you reload the page.